King Plumbing Drain Cleaning service has long been Hobarts most experienced blocked drain plumbers. With over 30 years of servicing Hobart's unique drainage infrastructure, we are the only call you need to make for fast, effective service. Call one of Hobart's best-clogged drain plumbers now.

✅ No Call Out Fees

Traditional rodding cable equipment, like an electric drain snake, has become a thing of the past. Although this method of clearing clogged drains is effective, it can not fully clean your pipes, leaving substantial amounts of tree root or sludge in your lines, and will damage your drains if used often.

The S trap pan, the section behind your toilet, designed to prevent sewer gases from entering a building, can be susceptible to blockages. A plunger may be all you need to push a clog out of the bend and into the drain.

When your toilet blockage is in the strap of the pan, call King Plumbing to inspect your toilet and remove the blockage.

Jetting Machines use high-pressure water at 5000psi to blast drain blockages to pieces while at the same time scrubbing the pipe walls, cutting out tree roots, flushing away grease and fat deposits that over some time have built up inside drainage pipes.

An electric rod cable cannot reach where a jetter hose can travel more efficiently and effectively. We have various jetter nozzles available to pull around toilet pan wastes and tight PVC gully traps.

What Types Of Blocked Drains Does King Plumbing Clear?

Whether it's a kitchen sink or the bathroom basin, toilet or laundry, even septic or storm-water, King Plumbing has the right equipment to unblock, remove clogs, clean, clear or repair your drain. Whatever the drainage situation with your smelly or clogged drain! Let our plumbing services diagnose the problem and cure your clogged pipe for good.

There are several reasons why drains become blocked! The kitchen pipes can become clogged with oil, grease, detergents, and food. In the bathroom, drains can be clogged with soap and hair.

Your drains outside can be blocked with roots, silt, and debris or flooded after a big rainstorm.

When sewer drain is blocked, the pipes are likely blocked by tree roots entering old cracked earthenware clay pipes. Earthenware drains when the earth moves; renovations, new home builds, excavation works, or heavy traffic can become damaged drains. It's unfortunate, but it can quite easily happen.

If your shower is clogged, we can safely remove the blockage using our latest blockage tools, which blasts away stubborn blockages.

Here is a list of the 11 most frequently asked drain cleaning questions:

How Do I Know If My Shower Is Clogged?

When your shower is draining slowly, you often find that water pools in the shower tray after you've turned off the shower mixer; this is usually a sign that your shower drain is clogged or a clog is developing. An unpleasant odour rising from your drain is a further sign of a clogged drain caused by the debris blocking the inner walls. A severe drain clog may even result in overflowing drains flooding bathrooms, causing severe damage.

king Plumbing has the latest modern drain cleaning tools to solve toilet, kitchen, bathroom or storm-water blockages. We'll use a Hydro-Jetter (high-pressure water) to thoroughly clean and remove blockages within the drain.

If you have a clogged drain causing an overflowing gully, we have the tools and know-how to find the problem and clear it out quickly.

How Can I Prevent Kitchen Drain Clogs?

Blocked drains in the kitchen occur when people aren't responsible for what they pour into the sink, like oils, fats, and food scraps. Never tip cooking oil and fat down the sink drain, and put food scraps in a compost bin when possible.

Do I Have a Sewer Blockage?

There are ominous signs of a blocked sewer. For example, there might be a foul odour coming from your drains, gurgling in the toilet pan, or unpleasant greywater overflowing from the gully drain outside. The shower, bath, sink, or toilet become slow to drain away.

Call King Plumbing to come to check it out straight away when you notice any of these signs.

If your drains have a tree root problem, it's time to get your drains cleared. If a root can get to a loose joint or crack in a pipe, it will continue to grow!

A running toilet causing a drain blockage is a general question – and the answer is "it could". There is a more likely chance the inlet valve in the cistern isn't shutting off because it's faulty. It could need replacing.

Do You Offer Drain Cleaning For Businesses?

We offer drain cleaning for homes and businesses alike. Whenever there's a blocked drain or plumbing problem, we're available to help.

Will You Need To Dig Up My Backyard For a Blocked Drain?

King Plumbing make drain cleaning as minimal as possible. We do not dig up the front or backyards to clear a drain blockage; however, excavation to get your plumbing back in working order if the drain is damaged or has collapsed is required.

We'll be upfront and transparent when additional work is required and provide a free quote before starting.

Should I Unblock A Drain Myself?

While you can remove a blockage yourself, government legislation makes it illegal for anyone other than a licensed plumber allowed to work on sewer drainage systems. We recommend getting a professional to clear blocked drains to cover you from fines and liability. A homeowner can use Chemical products that pour into a drain, but they're often noneffective at removing tree root penetration.

How Quick Can You Unblock a Drain?

It all depends on the severity of the problem. However, with experience and modern equipment, we have a fast turnaround for most drains– when there's a blocked drain in Hobart, we clear it ASAP.

What Are The Warning Signs Of A Blocked Drain?

If The gully outside overflows while using the washing machine, there's also a chance there's a blockage. When you are experiencing any of these issues, King Plumbing and we'll help diagnose the problem.

Blocked Bathroom drains pose a significant risk. If you're worried about a slow draining basin, get in touch with us today!

Call Us, Make an Appointment Today!

"Friendly. Prompt Service. Great job. Reasonable price. The toilet in my house was blocked. He helped to unblock the drainage system quickly"

"Thanks so much King Plumbing for coming to the rescue so promptly for our tenants. I picked the right plumber for the job and was so pleased to see that you have the latest equipment for unblocking problematic pipes. We'll definitely be calling on you again when we have another plumbing emergency"

"Fast friendly service, good pricing. Came, did what had to be done, and finished in under 30 minutes. Definitely a plumbing service to keep in the contacts list for future use" 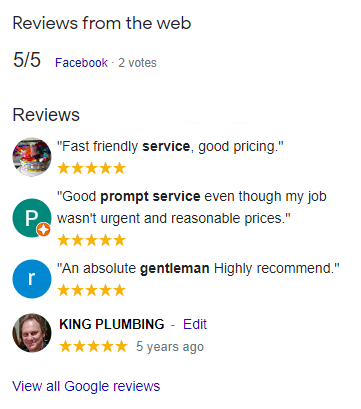 King Plumbing covers an extensive area across the Hobart region. Including but not limited to; the Eastern Shore, Howrah, Bellerive, and Rokeby and Warrane to Lindisfarne and Risdon Vale. Western Shore, Newtown and North Hobart to Battery Point and Lutana, Lenah Valley, Moonah, Glenorchy, Montrose. No matter where you are, we'll fix your plumbing.